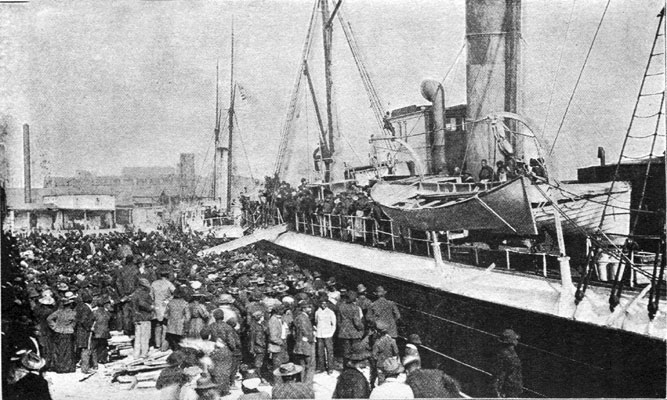 300 BLACKS WENT BACK TO AFRICA IN THIS SHIP IN 1896-HALF FROM ARKANSAS! ARKANSAS BE SMART IN 2012 AND COME BACK TO BLACK FREEDOM NOW!

ARKANSAS BLACKS WAITING TO GO TO AFRICA BY SHIP IN A CHURCH 1896-MORE BLACKS FROM ARKANSAS WHEN BACK DURING THIS PERIOD THAN ANY OTHER STATE!

BROTHER ISAIAH WASHINGTON WENT BACK TO AFRICA AND IS DOING SOMETHING TO HELP HIS ROOT COUNTRY SIERRE LEONE-HELP HIM AT reachonemillion.org

BACK TO AFRICA! -MALCOLM X TOLD US "WHY YOU LEFT YOUR MIND IN AFRICA!" -BLACK MEN COME BACK TO AFRICA NOW AND BE FREE OF PRISON,MURDER,WHITE COP KILLING-GENOCIDE!

FROM yeyeolade.blogspot.com
Friday, May 06, 2011
MALCOLM X ON “GOING BACK TO AFRICA”-FROM MALCOLM X SPEAKS-WE CAN EITHER GO BACK TO AFRICA OR BECOME AFRICANS CULTURALLY IN AMERIKKKA AND DEVELOP STRONG LINKS WITH THE MOTHERLAND IN THE PROCESS!
ON GOING BACK TO AFRICA- MALCOLM X’S COMMENTS TO A QUESTION AT A HARYOU-ACT FORUM FOR DOMESTIC PEACE CORPS MEMBERS,HARLEM,DEC. 12,1964
MALCOLM WAS ASKED HOW HE THOUGHT AFRO AMERICANS WOULD BE RECEIVED BY THE AFRICANS IF THEY SHOULD GO BACK TO AFRICA.
Malcolm : After lengthy discussions with many Africans at all levels, I would say some would be welcome and some wouldn’t be welcome. Those that have a contribution to make would be welcome,but those that have no contribution to make would not be welcome\;I don’t think any of us, if we look at it objectively could find fault with that.
And I believe this, that if we migrated back to Africa culturally, philosopically and psychologically, while remaining here physically, the spiritual bond that would develop between us and Africa through this cultural, philosophical and psychological migration, so-called migration would enhance our position here, because we would have our contacts with them acting as roots or foundations behind us. You never will have a foundation in America.You’re out of your mind if you think that this government is ever going to back you and me up in the same way they back others up. They’ll never do it,It’s not in them.
AS an example take the Chinese. You asked me about Red China. The Chinese used to be disrespected.They used to use that expression in this country:”You don’t have a chinaman’s chance”. You remember that? You don’t hear it lately. Because a Chinaman’s got more chances now. Why? Because China is strong. Since China became strong and independent, she’s respected, and she’s recognized. So that wherever a Chinese person goes, he is respected and recognized because of what he as an individual has done;he is respected and recognized because he has a country behind him,a continent behind him. He has some power behind him. They don’t respect him but respect what’s behind him.
By the same token, when the African continent in its independence is able to create the unity that’s necessary to increase its strength and its position on this earth, so that Africa too becomes respected as other huge continents are respected,then wherever people of African origin ,African heritage or African blood go,they will be respected-but only when and because they have something larger that looks like them behind them. With that behind you,you will get some respect. Without it behind you you can do almost anything under the sun in this society-pass any kind of law that Washington can think of-and you and I will still be trying to get them to enforce that law. We’ll be like that Chinaman (about whom they used to say “He doesn’t have a Chinaman’s chance”.Now you don’t have a Negro’s chance. But with African getting its independence, you and I will have more of a chance.I believe in that 100 per cent.
And this is what I mean by a migration or going back to Africa -going back in the sense that we reach out to them and they reach out to us. Our mutual understanding and our mutual effort toward a mutual objective will bring mutual benefit to the African as well as to the Afro-American. But you will never get it just relaying on uncle sam alone. You are looking to the wrong direction. Because the wrong people are in Washington D.C. and I mean from the White House right on down. I hope I don’t step on anybody’s toes by saying that I didn”t vote for him so I can say it.

Like
Be the first to like this post.
Tags: AFRICA, African Americans, BACK TO AFRICA, BLACK CHILDREN, BLACK MEN, BLACK PEOPLE, Black woman, BLACK WOMEN, MALCOLM X, RACISM, SLAVERY, THE BLACK RACE
This entry was posted on May 6, 2011 at 2:34 pm and is filed under Uncategorized. You can follow any responses to this entry through the RSS 2.0 feed. You can leave a response, or trackback from your own site.

One Response to “MALCOLM X ON”GOING BACK TO AFRICA”-FROM MALCOLM X SPEAKS-WE CAN EITHER GO BACK TO AFRICA OR BECOME CULTURALLY AFRICAN WHILE IN AMERIKKKA BUT BE TOTALLY LIBERATED FROM BEING 21ST CENTURY SLAVES AS WE ARE NOW IN AMERIKKKA!”

YEYE AKILIMALI FUNUA OLADE
I AM A BLACK AMERIKKKAN WHO 32 YEARS AGO WENT BACK TO AFRICA/YORUBALAND/NIGERIA TO RAISE 4 OF MY 5 CHILDREN AS CULTURALLY BASED YORUBA CHILDREN WITH THE LANGUAGE AS THEIR MOTHER TONGUE.